Trip Report- The Dirty Devil in May- What a Drag

I would be lying if I did not admit up front that I never really expected to be “floating” the Dirty Devil, in the river running sense. I knew that the water was low when we started and would be low throughout our trip. I also knew that most likely, and as it turned out, we would be walking and guiding our boat down the river. The truth is that we were out for an adventure. And we got one. There were nine days of movement, most of it down the Dirty Devil River canyon, enjoying the geology, animals, birds, stars, and solitude. In the end we ran out of water- there was not the slightest chance of getting the boat any further. There was barely enough water left at the ford to drag the empty boat up to the truck. The ford is where we changed our plans and went for a walk up Poison Spring canyon.

We started out with about 5 CFS, hit a high of about 11 CFS, both of which measurements were adequate to walk and guide. But when we hit the low- about .75 CFS- that was it. Lucky for us we were right at the ford when it dropped to near nothing. Because of the situation we were… almost in, I made Nico promise to run away screaming if I ever mention “floating” the Dirty Devil at anything less than 100 CFS again (although I feel it would be safe at 25 CFS or so, and I have floated it at a steady 10 CFS without much problem). Nevertheless, we had a great time. We saw red spotted and Woodhouse toads, carp, catfish, and other, smaller fish that I couldn’t identify. We saw Peregrines, a Virginia rail, and the usual vultures, flycatches, quail (a mother with 10 young), mockingbirds, and kildeer. We saw plenty of beaver sign, and found some fresh porcupine tracks early one morning. We also saw, surprisingly, three longnose leopard lizards along the way.

Porcupine tracks along the Dirty Devil. The conditions were perfect for viewing and photographing the tracks. The texture of the foot pads, the claws, quills on the legs and feet, and the occasional tails marks were all clearly visible. At this sandbar camp we found endless fresh tracks when we woke up including deer, rabbit, coyote, and beaver.

Geology
The geology of the canyon was an adventure in itself. By the time we left the area, Nico was an expert at identifying the stratigraphy and well on his was to understanding the depositional environments and ages of each strata. On our way down the canyon, we went from seeing the Entrada formation off in the distance to walking out of the white Rim sandstone at the ford. On our way up Poison Spring canyon we went back through the strata in the opposite direction, spending the first part of the walk in the ancient swamps of the Moenkopi formation and much of our time seeing the big, fluted walls of the Wingate formation. We ended at the highway looking across at the Entrada goblins once again with the imposing Henry Mountains in the background.

Nicolai walking up Happy Canyon, one of the geologic wonders along the way.

The Way Out and Survival Skills
Another high point of our “float” was the abundance of carp. I had told Nico about them before the trip and he was looking for them all along the way. When we finally came across the first fish a few days into the trip, he was elated to discover a new method for catching them. He would run them up and down the water for a while, tiring them out, and finally running them into the shallows where he could just scoop them up with his hands. The method worked great for carp, but we did not get to try it on catfish as we saw only a few of them. They were much more elusive than the carp, and kept well in the shadows, not being as easily spooked as the carp.

Nico caught this carp by hand, and had a great time doing it. He has since been discussing becoming the next host of “River Monsters”.

When it was finally time to admit there was no longer enough water, we left the boat and gear a few hundred meters up river from the ford in some willows and set out on foot. We started at about 6 a.m. with the intention of walking about half way up the canyon to one of our favorite campsites in some cottonwoods. We knew there was wood there for a fire, and there is (nearly) always running water nearby. Our original plan entailed making a coal bed to keep us warm. We only had a small day pack with food, water, rain gear, and a few survival items. For sleeping we had only a light bag liner and a poncho. The coal bed would keep us comfortable through the night. A coal bed, by the way, is nothing more than the coals a fire spread out and covered with sand or soil. The heat is trapped in the soil and radiates up throughout the night keeping you toasty warm.

We made it to our intended camp by mid-day and so took a break under some junipers up a side canyon. We ate lunch and had a nap while hiding out from the ever-increasing winds. By the time it started cooling in the afternoon my 7-year-old son suggested we just walk the other 8 miles to the highway. Never one to back down from a challenge to walk further, I accepted. We were within sight of the highway, about 16 miles from our start point, at about 8 p.m. The wind also helped my decision to keep going- there was no safe way to build the fire for the coal bed, so other plans would have to be made any way. As it ended up, we slept in a small, sandy depression surrounded by blackbrush for the night. First thing the next morning we were out on the highway, thumbs out, hitching our way back to Hite for our truck. 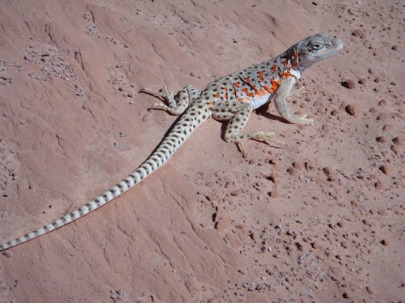 A female longnose leopard lizard we spotted in Poison Spring Canyon. It sat still and allowed me to take about 15 photos.

We are currently getting ready for a trip to Nevada in a few weeks, and preparing for the arrival of our new cataraft from Jack’s Plastic Welding. Our hope is to use the cat on the Green later in the season. I say it is our hope- the way things are going we are not at all sure the water levels will cooperate with us. For current river flows visit the USGS water data website. Another important planning site is the Utah Fire Data website. It will have all the current fire ban information, as well as data on current fires.