The summer is a busy time for us- busy and fun- and this summer has been one of the busiest in recent years. We have been travelling since March, barely home at all. We’ve seen and done so much that it is hard to keep up with it. This will be a quick post- a follow-up on a couple of earlier posts, and few words about our most recent trip. And as soon as I finish this one, we are off again- we have a permit for the San Juan River next week. Look for a post from that trip in a few weeks time.

Spiders and Tamarisk Beetles
As luck would have it, Nicolai and I found ourselves with some free time a couple of weeks back, and we weren’t too far from Green River Town. We stopped in town for a cup of coffee and some ice for the cooler. Then we made a visit to Crystal Geyser where we had a swim in the still-swift Green River and spent a couple of hours waiting for the geyser to blow. The geyser wasn’t too active, but we did get to talk to a researcher from Grand County who was checking the condition of tamarisk trees and the resident beetle populations. He happened to be checking a group of trees that were covered with those big spiders that we have encountered on our floats down the Green, so we asked for more information about them. He couldn’t tell us specifically about the spiders, but he did say that they seem to be following the beetle populations. It seems that they are feeding on the beetle larvae. He said that in that area in particular he had noted a couple of groves that were covered with the spiders. It seems that the beetles do have a natural, local enemy, a question I am sure that researchers asked when they were deciding whether to allow the beetles to be released. 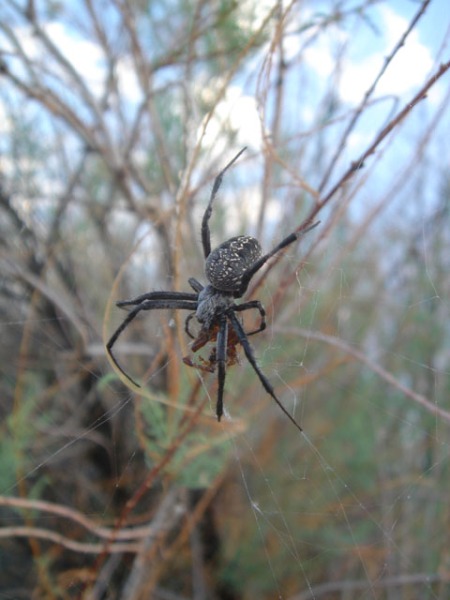 Unidentified species of spider at our camp at Crystal Geyser. This photo was taken on our float of the Green River in 2009.

Moab and Dalton Wells
On that same trip we made a visit to Moab, as we usually do. This time we did some driving around on roads and trails in the Sovereign area  north of town. One of the entrances to the Sovereign trail is through Dalton Wells, a historic site located just off the highway. It is on the National Register and there is an interpretive plaque explaining the history of the site. Dalton Wells began as a Civilian Conservation Corps camp and was in use for that purpose from 1935 to 1942. It was one of four camps located in the Moab area. The CCC members were responsible for countless projects in the Moab Valley and surrounding area during the years the camp was in operation. These projects were initiated by the Soil Conservation Service, the National Park Service, and what would become the Bureau of Land Management and included building stock trails, water development projects, range improvements, and fencing and pasture work.

From January through April of 1943 the Dalton Wells CCC camp became the “Moab Isolation Center”, one of many relocation camps for Japanese Americans during World War II. The camp was used for this purpose only briefly, and housed “troublemakers” from such camps as Manzanar in California and Gila River, Arizona. At most it housed about 4 dozen men, who were eventually transferred to the indian school at Leupp, Arizona on 27 April, 1943.

There are a couple of websites with more information on the camp- one is the Utah State History website, the other is the National Park Service page on Citizen Relocation Centers. The latter page has a couple of photos of the camp.

Great Horned Owls
In April we made a visit to Phoenix and Tucson where we visited the Arizona-Sonora Desert Museum among other locations. There is  a blog post about that trip for those interested in reading more. In Tucson we stayed in a hotel in the foothills that was also home to a Great Horned Owl and her two young ones. The owlets lived in a large planter box surrounding the deck of a second floor room of the hotel. It appeared that the hotel was respecting the owls by keeping the associated corner room vacant. Our room was right next door to the vacant room and so we had a great view of the owls, day and night. During the day the mother would sleep in a nearby pine tree, up high near the very top. The owlets would huddle together in the corner of the box, as far from onlookers as they could get. At one point the mother brought in a cottontail for the owlets to eat. They moved the rabbit around a bit, and we got to watch one of the owlets have its morning meal. At nights the mother and young ones would perch on the edge of the planter box, keeping a close eye on everything through the night. The mother would fly off and return all through the night, and would leave early in the morning for her daytime rest in the pine tree.

Mother and owlet Great Horned owls at their hotel room in Tucson. The owlet to the right that is bent over was only concerned with its rabbit breakfast. Most of the rabbit is in the foreground near the cactus. 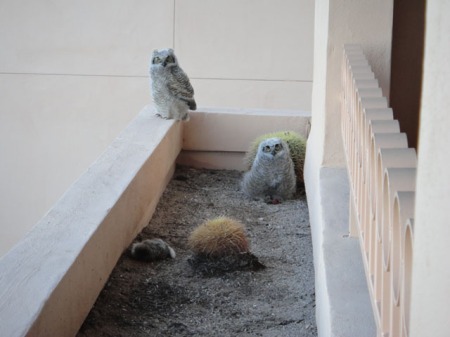 Owlets in the planter box.

Owlets getting ready for their daily rest in the early morning.

I have covered nearly everything I wanted to regarding my Escalante Trek in recent blog posts. The only loose end was posting photos of the trip. I have finally done that. A series of photos from the trek is up on the Desert Explorer Picasa page. For more on our desert adventures, desert backpacking, floating and general information, visit the Desert Explorer website.