On Adventure, Diet, Health, and Fitness

I know this is a departure from my usual post topics of the desert, gear, trip reports, and archaeology. In a sense it is a belated follow-up to a post of a few years back about going gluten-free and making other changes to my diet.  As someone who has been going for my entire life, who never stops moving, as a runner, a hiker, biker, backpacker, and so on, my health and fitness define my life.  Diet is an inseparable part of that health, fitness, and lifestyle. And so, this post.

To recap what prompted some pretty drastic changes to my diet, a few years back I started experiencing allergic reactions to certain foods, or so it seemed. The reactions were in no way life threatening, but more of an annoyance. I decided immediately to make some changes- no more gluten, soy, peanuts or dairy other than occasional hard cheeses- more recently I have cut out grains and all added sugars as well.  Since then I have felt great- and often realised that I have never felt better!

But once again some of those reactions started to show up.   I visited my medical doctor who within seconds of my describing the symptoms was already talking about drugs and allergy tests. Since I went to her without any expectations of help, I left in the same mindset- that change was up to me. I immediately went back to doing more research and found that intestinal permeability was a very likely cause of the reactions. And probably had been all along.

Yes, it seems to be another “trendy” problem; intestinal permeability is up there with being gluten free, fermented vegetables, and paleo diets.  But there are times when trendy things make sense, when data support the trends we follow. All of a sudden, everywhere I looked, every book I picked up, every person I talked to told the same story. Intestinal problems seemed to be affecting everyone. I felt very disturbed at this development, both because it affected me, and because I found myself asking what kind of a world we’ve created where we readily accept and eat “food” that is toxic and is killing us! But the eternal skeptic in me understood that we live in a time of producers and consumers. We take what we are fed…at least until we can’t take it any more….

Back to diet and health. As the symptoms returned a book showed up at our house. My son read it first, and would not stop talking about it. It covered so many of his interests- World War II resistance fighters, guerilla warfare, Greek mythology, edible wild plants, diet, exercise, parkour, and natural movement. So I had to read it next. I was immediately so engulfed that I couldn’t put it down. Not only did it convey so many things I really needed to read about, it sent me off in other directions which were equally important to my current research. First published in 2015, Natural Born Heroes is written by Christopher McDougall. The book is centered in Crete during World War II, but it is so multi-dimensional, so full of adventure, and leads in so many other directions, that it will appeal to just about anyone. McDougall introduces the reader to the Cretan resistance during World War II, to the local sheep herders who became guerilla fighters when they needed to, to operatives from Churchill’s Ministry of Ungentlemanly Warfare, and to how they fought together and used the natural environment as part of their strategy to win.  So, how does this relate to my health? 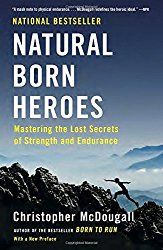 Natural Born Heroes by Christopher McDougall- another starting point for me in my quest for a healthy, active life.

The author, an athlete and ultra-runner, talks extensively about diet and how it relates to the ability to endure physically. He introduces the paleo diet, the Maffetone Method (more on that in the future), and sugar-free, meat and vegetable based eating. There are so many other topics he delves into- “health as heroism”, the importance of interaction with nature, the history of natural movement, diet and evolution, fat as fuel, the myths of cholesterol and carbo-loading, and the menace of sugar- that there is no way I could cover it all in a blog post. I suggest reading the book! It was another starting point for me, helping take my health to another level.

Next on the reading list is a book about autoimmune conditions. More fun reading, which I will write about soon. In the meantime I’ll be running every day and enjoying my health. For more on our adventures- most of which take places in the Utah  desert- visit the Desert Explorer website.