We usually end our hiking season in September at the latest, but that may change to November now based on our recent trip to the desert. Weather was our primary concern- we did not want to be snowed in, stuck in the tent sitting out storms. But luck was with us- the sky was clear and the days were warm, even hot, for nearly our entire trip. It was so warm that side blotched lizards and what I think was a striped whipsnake were still out! We timed our return perfectly and travelled back over the mountains just before the cold and snow returned to Colorado. Next November may not be the same, but if we can stretch our season and spend more time in the desert, we’ll certainly try a late trip again.

What I think is a rather dark Striped Whipsnake. This photo was taken on November 15th along the San Juan river. All I have read about them says that they den up by mid-October. Not this year. This snake was high up though, right along a cliff face and getting ready to sleep for the winter.

Most of our time was spent around Bluff and along the San Juan River once again. Nicolai and I hiked nearly every day and re-visited a couple of sites, but mostly explored new areas; new canyons, new dirt roads, new rock art and ruins. While a visit to the desert is success in and of itself, based on the sites we found on this trip I would label it a complete success. We are at a point where we have visited many of the more well-known sites and are just picking a canyon and walking down it. On this trip we picked a canyon north of Bluff and spent a few days walking along one wall of the wide and bushy canyon bottom. We did the same in a few other canyons as well and, as always, needed more time to see all that was out there.

A Few Words About the Archaeology of the Region
As anyone familiar with the area knows, the ancient population density of these currently sparsely inhabited areas was greater than it is today. Of course the population was dynamic, and changed over the thousands of years of prehistory represented in the rock art of the northern San Juan region.  Certain areas were inhabited, abandoned, and re-inhabited later on, other areas were not populated until relatively late, and some were occupied for very long spans of time. The population here was more dispersed over the landscape, taking advantage of available resources including building sites and food and water sources. The larger “villages” were smaller than today’s rural cities and towns, but the “hinterlands”, the areas we are visiting when we walk down the canyons around Bluff, what many see as the empty spaces between the towns (both ancient and modern), certainly had a much higher population. For the record, when I mention “villages” I am not referring to large population centers such as Chaco Canyon or Mesa Verde, but rather those in the peripheral, “rural” northern San Juan region such as ancient Bluff, Hovenweep, and Yellow Jacket. 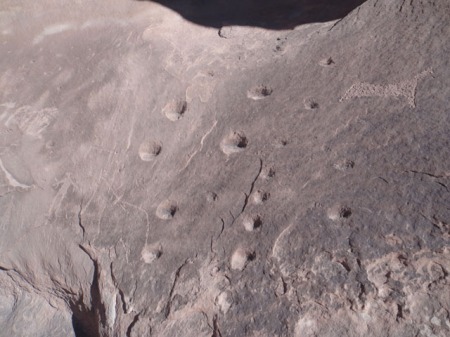 We found Moki steps nearly everywhere we went over this trip. Some of them were definitely needed in order to scale a wall, others seemed really unnecessary, and still others appeared to head to nowhere. Later, Ute petroglyphs were prominent in one area we hiked as well. Note horse in upper right of photo.

A few of the sites we visited had extensive middens, full of lithic debris and pot shards. It was clear that these sites are off the beaten path. Most sites that are found along a roadside or are included in guidebooks are completely devoid of any type of artifacts. Visitors over the years have taken everything away. As an archaeologist this is a painful thought. Artifacts tell a story. When they are found in context- at the location where they were deposited 600, 800, 1000 years prior- they can provide valuable evidence about the people who left them behind. They can inform us about occupation time spans at the site, about how far the occupants may have travelled or how far away their visitors came from, and can tell us about the relative importance of the site and its people. When you visit a site, please leave any artifacts you may find exactly where you found them. Although they may not seem important as you look them over, they may provide important data to the archaeologist who visits the site tomorrow.

A selection of Mesa Verde black on white pot shards, Pueblo III, about 1200-1300. A few of the sites we visited had large middens that still had hundreds of artifacts on the ground surface. The decoration ranged from hurried and uneven hachures to well thought out geometric designs.

A Drive into Arizona
We took a drive down to Kayenta one day, looping south from Bluff toward Mexican Water and then west toward Dinnehotso and Kayenta, and coming back through Monument Valley. If you have an extra day and feel like seeing some amazing scenery from your car, this is a great drive. Driving south you will see the Chuska Mountains rising in front of you, with Chinle and Canyon de Chelly off in the distance. Turning west you will see Black Mesa out in front, and Comb Ridge on your right. It is a scaled-down Comb Ridge after leaving Bluff, but it is still Comb Ridge. Then of course you will drive through Monument Valley on your way back into Utah. While in Kayenta, be sure to see the Code Talker exhibit- start at the Burger King- yes, that is where a part of the collection is housed. There is a small museum right next door where you can see more. Their hours seem to be erratic, so depending on the day and time of year they may or may not be open. There are plans for a permanent Code Talker museum- you can learn more about that project at the official Code Talker website.

Lizard figures (?)- part of a much larger panel we found on one of our hikes. Scale is ten centimeters.

Edge of the Cedars State Park Museum
Finally I have to mention one of our favorite museums, the Edge of the Cedars State Park Museum in Blanding. If you travel across southeast Utah on Highway 191 be sure to allow at least an extra hour or two for a museum visit. The museum is just a few minutes from “downtown” Blanding, right on the edge of town. It houses an extensive and impressive collection of artifacts, including pottery, a set of plates carved from cottonwood, and a one-of-a-kind Macaw feather sash. They also have a number of very important finds from Comb Ridge that were found by hikers who alerted archaeologists of their discoveries. Their stories and photographs are included in the exhibits.

Our trip was so full that this single blog does not nearly cover all we saw, or all we wanted to write about. We will do our best to write a second post soon, covering more of the rock art we found as well as mentioning a couple of new pieces of gear we tried out. In the meantime, visit the Desert Explorer website for more about our desert adventures.