Trip Report- Back From a Week in Central Nevada

We have just returned from another visit to central Nevada, specifically the Lahontan Valley in Nevada’s Great Basin. The town of Fallon, where I grew up, sits in the middle of the valley. This is always our base camp, and we do day trips and overnights from there. On this trip we visited Lake Lahontan for some swimming, Grimes Point to view petroglyphs and to run, the town of Yerington, Stillwater Marsh and many irrigation ditches for birding, and we watched fighter jets and helicopters fly all around the valley. We also visited the site of a recent jet crash near the navy base southeast of Fallon- this was one of Nicolai’s favorite parts of the trip.

Jet Crash
The local news outlet, the Lahontan Valley News, reported on 08 July, 2010 that an A-4 Skyhawk jet had crashed just north of the Fallon Naval Air Station. The pilot ejected safely, bringing the jet down in a field just outside the base. No one was hurt, and no property was damaged. Had the pilot not brought the jet down where he did, the situation could have been much worse. The news report stated that the jet was  contractor-owned and the pilot a civilian, tasked to simulate enemy aircraft for training purposes. 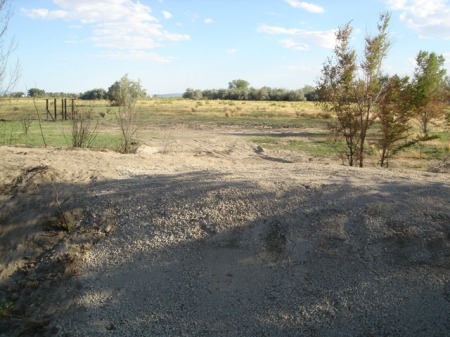 The point of impact, the bank of a ditch flanking a field. Fill dirt was brought in to rebuild the ditch bank. The photo is taken in the direction of the debris scatter and ensuing fire. 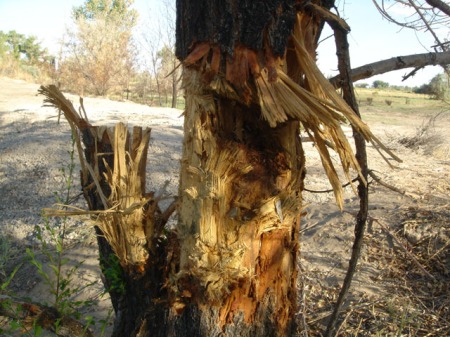 A tree on the right side of the point of impact, possibly clipped by the jet's wing. Note debris still embedded in the tree.

Nicolai was fascinated by the crash site, and we approached it as crash investigators might. We spent a couple of hours at the site, with Nicolai photographing and drawing the point of impact, the burn scar, debris field, and the bits of debris still at the site. 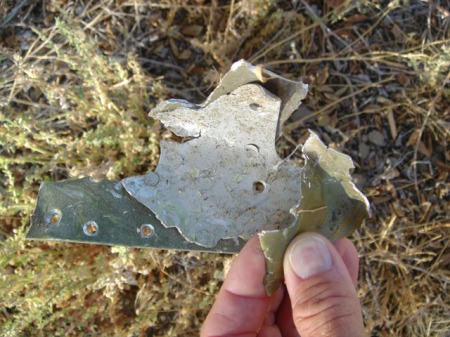 A piece of debris at the crash site. There were many small fragment of aluminum lying around the field. Most were missing all the rivets that held the aircraft together, torn out upon impact.

Jet crashes are unfortunately not uncommon for the area, with the Fallon Naval Air Station being a primary training center for pilots. Most of the crashes I am aware of have occurred on the bombing ranges, and not in inhabited areas, as this one did.

Grimes Point
Every visit to Fallon requires a trip to Grimes Point Archaeological Area. The Grimes Point Petroglyph Trail is a short walk, maybe 1/2 mile, that takes you by at least 25 boulders bearing rock art that is as much as 7000 years old. Nearby caves hold clues to the ancient past and were used for storage, living, and burial. The more important caves have been secured, but there are tours available of Hidden Cave. You can visit the Churchill County Museum for more information regarding the cave tour and the history of Fallon and the Lahontan Valley. Also see their PDF on the Hidden Cave tour and Grimes Point. See our June 2008 blog post on Grimes Point for more information on archaeological research at the site and on the prehistory of the area.

For runners and mountain bikers, Grimes Point is an excellent choice for long runs or rides. I usually manage to get in a couple of easy 2 or 3 hours runs on the dirt roads in the area. You can ride or run for hours on the endless dirt roads and tracks throughout the area. 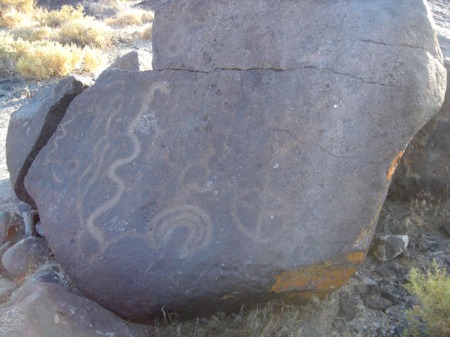 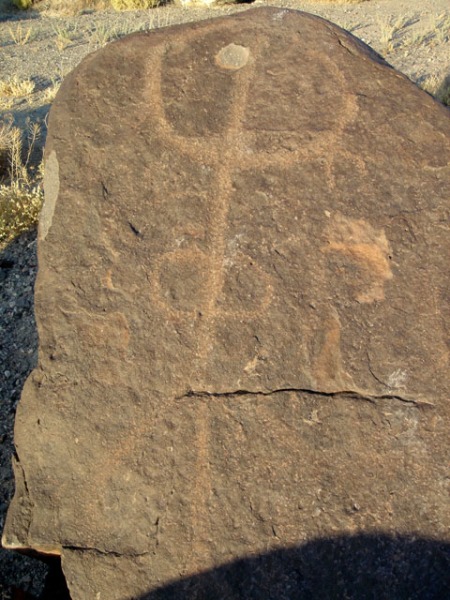 Birding in the Lahontan Valley
The area around Fallon has great birding- the Stillwater National Wildlife Refuge east of Fallon is known internationally for its water and shore bird populations. According to the Fish and Wildlife Service web page for the refuge, over 280 species of birds have been seen there. This may seem like an unlikely number of species for an arid, high desert region. But the Carson Sink, the location of the Stillwater National Wildlife Refuge and the adjacent Fallon National Wildlife Refuge, marks the end point of the Carson River. It is here that water travelling through the Lahontan Valley forms the Stillwater Marsh. On this visit within the first half hour we had seen flocks of White-faced ibis, American avocets, American white pelicans, Great blue herons, various egrets, a few Golden eagles, and gulls and coots. If you are looking to fill out the shore birds on your life list, this is the place to do it.

Check back in a few days for the second part of our Nevada Trip Report. We will cover new dining options in Fallon, visiting Lake Lahontan, and visiting the town of Yerington.

This will be a very brief blog post, with more details to follow once we are back home. Nicolai and I are currently in Fallon, in Nevada’s Great Basin. We have been watching birds, jets and helicopters from the local Naval Air Station, and enjoying the hot and dry desert air- it has been in the high 90’s here.

We spent a couple of days at and around Lake Lahontan, the local reservoir created by the damming of the Carson River early in the 20th century. I will give more details on visiting Lake Lahontan in our end of trip blog post.

We still have a few days here and plan to visit some of our local favorite locations including Stillwater Marsh for more birding, and Grimes Point to have  a look at the petroglyphs. Our trip back to Colorado will be via Amtrak; we have talked about taking the train for years now and Nicolai is very excited about seeing some of our campsites in Utah from the train. We will try to get some photos along the way as we travel through Utah.

For more on our trips to Nevada, Utah, and other western locations visit the Desert Explorer website.