This Way Down, and An Update From Moab

We have been spending a lot of time in Comb Ridge in recent years, stopping in for a few hikes on nearly every trip. We have been in many of the drainages along the southern end, starting at the highway. But there are many more summer’s worth of hikes towards the north. One specific goal this summer is to find at least one of the crossovers into Comb Wash from the Butler Wash side. I understand that there are a couple of them. And I have a suspicion that we may have been in one of the drainages that leads to the other side. A few summers back we here high up one of the canyons, walking up canyon, when we found a small petroglyph panel that had a large ladder-looking inscription. To me it looked just like a kiva ladder. Did the ladder signify to travelers that they could climb down the other side if the followed this particular drainage? This is a question I would like to answer, to see if this was an ancient signpost saying “this way down”. 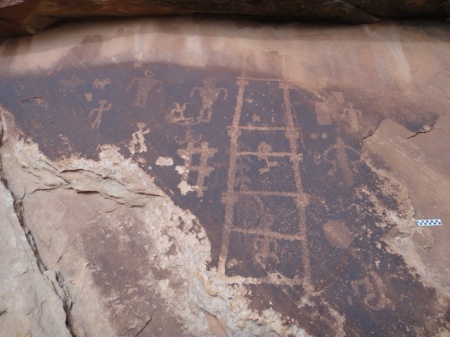 Kiva ladder petroglyph from a canyon along Comb Ridge. Scale at right of image is 10 cm.

Update From Moab
We were in Moab in January when news broke about the closing of another missing person case. On the evening of 19 November, back in 2010, Ranger Brody Young was checking on a car parked at the Poison Spider trailhead. The person in the car opened fire on him, hitting him nine times. Range Brody returned fire and apparently hit the suspect as he fled. The suspect’s car was found within a few miles, but he was not found. A manhunt ensued, but was unsuccessful in locating the suspect. Now, five years later, the body of Lance Arellano has been located. A college student home for the Christmas holiday and his younger brother did a systematic search of the area where the suspect was last known to be, and found his remains.  The brothers will split the $30,000 reward. You can read more about the incident on the Moab Times website.

Summer Is Coming, and There Is So Little Time

It has been many months since I have written a blog post. There is no possible way to catch up on all the desert adventures we have had in that time. To mention of few of them, we spent a week in the San Rafael Swell area, went for another San Juan River float with incredible rain fall and flash floods along the way, did more excavation at Nancy Patterson Village, spent weeks in and around Moab, had many long, solo runs down roads and trails, did lots of canyon hiking, backroad driving, and general exploration of southeast Utah. Last year was a great year overall, and this year proves to be much the same. We have already taken two trips to the desert, and our next is just a few weeks away- spring break is just around the corner!

One of the highlights of last year was the San Juan River. I did that trip solo, and so had no real schedule other than to float down the river. I did a few hikes up side canyons, all of which I’d had in my mind to do for some time. There was a huge storm a few days into the trip- I put in at about 400 CFS and took out just over 8000 CFS. It made for a really fun float to say the least. I have never seen so many pouroffs running at the same time. The sound that came with it was deafening at certain locations along the river.

As I noted above, I did some side hikes along the way . One canyon I visited had countless ruins in it. I could have spent days exploring, but was happy to have a long day to walk up and back. Many of the ruins I saw were completely inaccessible without technical gear to get in. Needless to say, I enjoyed them from the opposite rim or canyon bottom for the most part.

One of the smaller ruins I was able to climb up to. It was so perfectly square and plumb, it left me wondering how we have so many problems with our own residential building today. The very distinct foundation was an interesting feature as well, being offset by the plaster that was still in place.

After finishing up on the river I spent five days along Comb Ridge. I am slowly making my way through all the canyons, seeing at least a few of them on each trip to the area. As always there was so much to see, and the time I had to see it in really seemed inadequate. I found a few small structures along the way that appeared to be sweat lodges. I have found a few of these at the mouths of the canyons, out near Butler Wash, and a couple of them up in higher ends of canyons. Most are small, however one that I came across on this trip did seem more like a shelter than a sweat lodge.

What looks to be a sweat lodge at the mouth of one of the Comb Ridge canyons.

I won’t go into the Nancy Patterson archaeology here, but save it for another post. My report is nearly done, and I plan to upload it again in a blog, as I did with the 2014 report. No promises when that will come… but it will be by May when we head over for this year’s excavation.

In the meantime see the Desert Explorer website for more on our desert adventures, our gear preferences, and plenty of book recommendations. I have been spending a lot of time updating the site, adding current links where they were broken, and doing my best to update information that I haven’t revisited in many years.