On our most recent trip to Utah we decided to hike a canyon close to one of our camps. We had been wanting to hike this particular canyon for a very long time, and what we found was a big surprise. After hiking for about forty five minutes, we stumbled upon what looked like human foot prints. At first they looked like tracks from someone wearing “barefoot shoes”, but after closer inspection we found that they were actually tracks belonging to a black bear. A little more hunting showed there was a definite bear trail. We decided to follow the tracks as we still had not found a way into the bottom of the canyon and were pretty certain they would lead us to a way in. Farther along the trail we found another set of tracks, these likely from the night before. From then on it was a goldmine of bear sign.

Once in the canyon we found scat, even more fresh tracks, and lots of feeding sign. One of the best things we found was a set of tracks that were from a mother and a cub. They had stepped into part of a little stream and when we found them the tops of the tracks had just started drying. We calculated they could not have been made any more than twenty minutes before we found them. Their tracks went further up the canyon, so we went down! Through out the day we saw many more tracks along with a wide variety of sign, but nothing newer then a few weeks. It appeared that the bears stayed mostly in the upper parts of the canyon and had not ventured very far in quite a while. 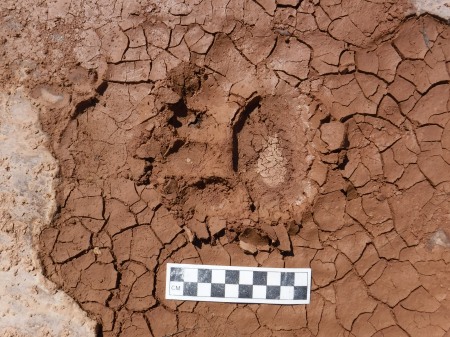 A perfect black bear track in quickly drying mud in the canyon bottom.

One of the most helpful things for identifying bears are their tracks. Although similarities can be seen for both black and grizzly, both kinds of bears have different characteristics to look for when identifying their tracks. For instance black bear tracks are usually smaller but can be easily mistaken if they slide in mud or if the track is a double register (two tracks, one on top of another). Unlike black bears, grizzly bears are diggers so their claws, if present, can register up to an inch or more away from the toes. The tip of the claw can also be the only thing that registers so look far in front of the track. Another feature is that grizzly claws will show just on the surface whereas black bears are climbers, and their claws which are curved more drastically than grizzly’s will register deeply and relatively close to the toes. One more thing that I should mention that contributed to the identification is that Utah is not within grizzly bear range so when identifying the tracks we could immediately eliminate grizzlies from the list of possibilities. This is not the case for a lot of places though. In much of the northern United States, Canada, and Alaska the range of black and grizzly bears overlap making it potentially more difficult to identify the species.

Don’t bust the crust! Good luck explaining that to a black bear. Tracks through crypto-crust heading into the canyon.

Blacks bears are always eating so it is not uncommon to come across places where a bear has eaten. Feeding sign can be anything from turned over rocks and logs to some berry bits laying on the ground. During our hike there was feeding sign all through the canyon. The area that we found the most sign was about half way down the canyon. We were walking through an area strewn with a mixture of small stones and boulders, and we stumbled upon an entire line of rocks 6 to 18 inches in diameter that had been shifted and turned over. Farther along there was a log that had been rolled over. Both these groups of sign are pretty common to find but also very distinctive of bears feeding. Often you will see a whole line of rocks that have been moved and shifted. The bear sticks its claws under the rocks and flips them over when looking for food.

During our hike the freshest bear sign was concentrated mostly in the upper parts of the canyon. This is probably because there was more running water and thus more food. Another contributing factor to so much sign is that the canyon is rarely explored by humans. On the hike we found only one set of human tracks that were at least a couple of months old. All these factors contributed to the canyon being prime bear habitat.

Our hike start to finish ended up being about 10 miles, but it felt longer because of all the ups and downs and the time spent looking at bear sign. We ended up climbing out of the main canyon through a drainage that was actually a marsh. This added more time to our adventure and made it all the more interesting.

This entry was posted on Saturday, February 24th, 2018 at 18:18 and is filed under bears, tracking, utah. You can follow any responses to this entry through the RSS 2.0 feed. You can leave a response, or trackback from your own site.